Today I turned 79 and decided to take Bernie and Chris up to Payson, Arizona. The weather had hit 100 degrees a few days ago, but then it suddenly turned extremely windy. Cold wind from the north dropped the temperature into the low sixty’s, and the stiff wind kept the Sunflower RV Resort staff guy busy.

All day he rode around in his golf cart, picking up cut-end pieces of palm tree debris and several palm fronds. Not quite gales, but gusts were between thirty and forty miles per hour.

I knew it would be even cooler in Payton’s higher elevation. I struggled into Levi’s, sucking in to button and zip my size 38 waist. It fit last year, but I knew I wouldn’t be wearing them today.

I found a size 40 and had to accept that was today’s wear. My 205 weight had magically ballooned to 213 with absolutely no help from me.

We left at six with a 55-degree temperature, and it was windy. The dogs had no idea we were going on another trip. A quick stop at their exercise area and then off to Walmart. They enjoyed hot dogs when we went to Yuma a few weeks ago, so I bought another pack for their first meal today.

Payson is a fairly straight shot. Phoenix highways make it easy for me. I caught Loop 101 North as it bent around and took Exit 41 to Shea Boulevard. The Saturday morning traffic was very light, and eleven miles later we were at State Route 87.

It is also known a Beeline Highway.

This Beeline Highway has quite a history. In fact, the intersection of this photo (Shea Boulevard and Beeline Highway) is part of the history. It took several years to pave the Beeline completely, and Supervisor Jim Hart became known as the “Father of the Beeline.” There was a movement launched to honor him by naming the highway “The Hartline.” However, on February 6, 1960, Jim Hart was killed on his way home from Payson in a single car accident near the intersection of Shea Boulevard.

The Mazatzal Mountains was a huge travel obstacle. Increasing pressure from residents of both sides of the mountain wanted a quick and safe route from Flagstaff to Payson. “the town was about to ‘come of age in the modern world’ and lose its isolation.”

The desire for the road had been discussed since the early thirty’s. Although it finally got started in early 1950, it would be another eight years before it was completed.

Here is a thumbnail sketch of what those Arizona pioneers faced.

Payson has been called “The Heart of Arizona.” Its location places it very near the geographic center of Arizona.

Travel from Flagstaff to Payson, a distance of about ninety miles through the mountain meant a slow and dangerous five-day wagon trip over the Bush Highway. It was about the same distance from Globe to Payson.

Supervisor Jim Hart came to the rescue. He had a summer home in Payson, to which he often retreated. He negotiated with the Salt River Pima and Fort McDowell Indian tribes to obtain a diagonal right-of-way across their reservations to the Bush Highway. Thus, the shortcut was given the name “Beeline Highway.”

As I traveled the smooth, paved two-lane divided highway the seventy-five or so miles through the canyons and around the mountains, I recalled reading how difficult it was to construct this fantastic scenic highway.

The old Bush Highway had to be upgraded, curves straightened, and bridges installed. One worker never operated a jackhammer before. “Those first few days I suffered. My wrists were so sore. I’ve seen guys with their wrists swollen to twice their normal size.”

“The jackhammers got so hot we had to wrap them in the sacks the dynamite came in so we could hold onto them. And it was pretty loud. I think that’s how I lost my hearing.”

“The workers, among them some Payson residents, attacked the route with vigor, dynamiting their way through the canyon and hillsides.” 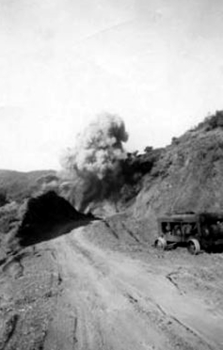 “Sometimes the rocks from a blast rained down on the neophyte highway workers. Counselors told how the fumes from the nitroglycerin in the dynamite gave them headaches and the foreman had to go to Payson to the doctor at least once ‘he hurt so bad he thought his head was gonna come off.”

As I drove along, admiring the scenery I sought a place to stop. We had been on the twisting, rising Beeline Highway for about an hour and the dogs needed their bathroom break.

I spotted a very short opening by the roadside and quickly took advantage of the opportunity. It was a dirt road with the grated cow guard. On both sides of this opening was triple-strand barbed wire.

“The cattle guard had its origin in the Great Plains, being independently developed in a number of locations from Texas to North Dakota in the decade beginning around 1905 in response to the introduction of a growing number of automobiles in fenced range country.”

Bernie approached the cattle guard, inspected it and went to the barbed wire and slunk himself under it. He is about three inches taller than Chris.

A few minutes later Chris walked up to the cattle barrier, looked it over and decided to do a light-hop. Unfortunately, one foot slipped through, but before I could react, he managed to extract the foot, and he was on the other side.

Both dogs investigated the other side, while I watched. I didn’t want them to wander too far. I was also curious how they would return to me. I wasn’t worried… just wondering.

In time, Bernie decided to return and easily slipped back under the barbed wire and came for petting. Chris was now stuck. He may have seen Bernie’s way back, but when tried to slip through, one of the barbs lightly touched him.

For Chris, that was enough. He jumped back and went back to the cattle guard. Together, he and I were trying to get Chris to come to me. He would approach the cattle guard, and I encouraged him to jump it. I knew he could jump the entire distance.

He hesitated and went back to the barbed wire. One more try, but he shied away and decided he must use the cattle guard.

It probably took another five minutes before Chris did a half-way jump… one foot very lightly touching a single bar and he was across and came bounding up to me.

As I was petting Bernie and Chris, a man in a white car pulled up. He wanted to know if we were hiking.

“No, just exercising the dogs before we continue on to Payson.”

We chatted a few moments. He was hunting jackrabbits. He said a lot of people don’t like the taste, but he sure did. He uses a twenty-two rifle. He said, “I usually have a partner.”

By hunting together… about twenty-feet apart, they spook the jackrabbit. The usual pattern is the jackrabbit will run straight for a bit and then veer right or left. It narrows the field of fire for whoever is closest.

He lamented that hunting alone makes it tougher.

I wished him luck, and he drove over the cattle guard, parked his car and gun in hand, strode off eastward.

Back on the road, we continue our twisting scenic view. 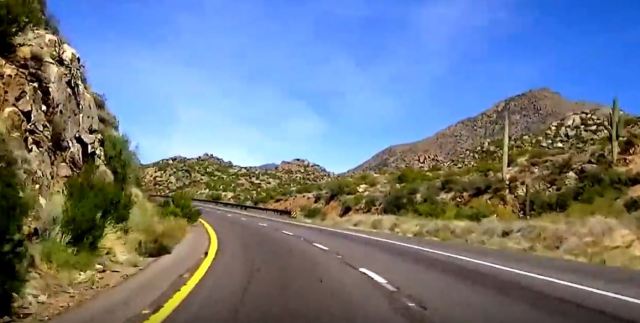 These rugged mountains were home to Apache Indians. The ranchers, hunters, prospectors and their families were always in danger from the Indians. It’s why so many military forts were constructed in the middle 1800’s.

Isadore Christopher started ranching in early 1880. Early July 1882, Apache raids set fire to several cabins in his area. Isadore was away at the time. He had recently killed a bear and tacked the hide on the cabin to cure.

When soldiers arrived, they saw the charred hide. They thought the Indians had killed Isadore. The held a funeral. Sometime later Isadore appeared… or so the story goes. It happened near Star Valley, just up Route 260 from Payson.

Once over the top, about 5,000 feet elevation, we started down into the valley.

Although it wasn’t too soon… the entire scenic trip was wonderful to experience.  But finally, we met the first stoplight since entering Beeline Highway. We were in Payson.

The completion of the State Route 87 across the Mazatzals had a social, economic, and political impact on both the Salt River Valley and Payson.

“The scenic highway became the gateway for visitors to Payson, the Rim Country and beyond, with its prime recreational opportunities for hunting, fishing, camping and escaping the desert heat.”

It will take another trip to this area to explore the many interesting sights and history.

Today, we visited Jeri and her friend. Phil Hatch and Jeri are enjoying being a local ‘item.’ Phil is a fifth-generation Arizonian. Having grown up within a hundred miles of Payson, he’s a down-in-the-dirt guy. Literally.

Anyone who rides in a rodeo finds himself on the ground. However, also a prospector Phil is currently involved in micro-mining. I’ve never heard of micro-mining, and his eyes lit up as he tried to explain it to me.

Suffice it to say it involves a technical chemical process that extracts a significant percentage (like 90 percent) … according to Phil.

You dump the rock-bearing gold into a series of screens to filter various sized rocks. You grind the rocks into a fine powder. You add the chemicals that separate the gold and pour the result into another chemical wash.

Sounds simple. Like all things, the devil is in the details.

While I sat spell-bound learning all about micro-mining techniques, Bernie and Chris were outside having fun with a blue-eyed Australian Shepherd female named Shelia.

Jeri has a huge fenced yard full of different gardens, trees and lots of grass. All three dogs were in heaven.

I met Jeri when my deceased wife, Cricket, was in the hospital. They were bedmates sharing a room. That was about nine years ago.

Jeri has lived in Payson for thirty-three years. Her history includes being a US Marine, owned at least two bars, a beauty shop, and a restaurant. She drove her thirty-eight-foot motorhome all over the United States and somewhere in Mexico. She enjoys playing Bingo and dancing. Jeri and Phil, both spring-chickens, enjoy these activities.

We shared a birthday lunch at Payson’s local 260 Café Buffalo where everything is freshly prepared. I had a great Reuben sandwich and Birthday special Cherry pie with vanilla ice cream. The waitress got half-way through singing ‘Happy Birthday’ and quit… she claimed she didn’t know the rest of the song.

I think she was embarrassed.

I’ll have to come back and explore more of Payson. I spent the entire visit at their home.

Edit them in the Widget section of the Customizer.