Surprise, the fastest-growing city in Maricopa County, is located in the southern part of Arizona. It is adjacent to the greater Phoenix metropolitan area. Surprise is about eighty miles from Mexico and 150 miles from California. 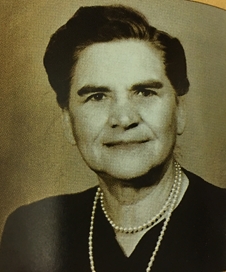 Flora Statler, the founder of Surprise, Arizona once remarked, “I would be surprised if the town ever amounted to much.”

The name stuck. Today, people chuckle how this single one-mile section of land has grown from her off-the-shoulder comment of ‘amounted to much.’ 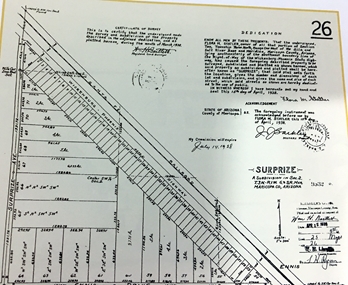 However, modern population growth didn’t happen with the snap of the finger. Frontier Arizona produced a mixture of harsh desert, brutal mountains, extreme heat, and drought conditions. Survival required a constant awareness of rattlesnakes, scorpions, and encounters with hostile natives.

Before crops would thrive, the land had to be managed. The ancient Hohokam (A.D.200) enjoyed an intelligent, highly developed society. By A.D. 1100 the Hohokam had created a network of cities and satellite communities with as many as 100,000 people.

Villages, of up to several thousand people, were located at three-mile intervals along the canals. Phoenix was built on the ruins of several prehistoric Indian villages.

A 1939 view of a Hohokam canal. The ancient Hohokam culture began turning the barren desert into an agricultural lifestyle. They irrigated 70,000 acres with 500 miles of canals, some as wide as 50 feet at the bottom.

In 1539, Europeans first recorded the modern history of Arizona. The settled population remained small until the 1849 California Gold Rush. More than 50,000 miners traveled across the region. It lead to a boom in Arizona’s population.

Arizona became a state on February 14, 1912. Although gold discovery happened, the economy was primarily based the five C’s: Copper, Cattle, Citrus, Climate, and Cotton. Copper mining was Arizona’s premier industry until the 1950s.

Three significant factors influenced Arizona’s growth: First, Americans began their long love affair with the automobile. The automobile not only increased demand for steel and cotton, but it also transformed the American economy. 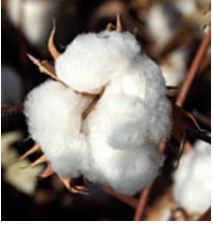 The second significant factor: Long strand Pima cotton became the white gold in the West Valley. By 1920 there were almost 230,000 acres of cotton in the state. Arizona cotton was so valuable and so profitable that farmers stopped producing almost all other crops to concentrate on cotton.

The third significant factor: The onset of World War I planes and vehicles needed tires. Each tire required five pounds of cotton. By 1920 cotton produced more than 250,000 bales.

Sherry Simmon Aguilar, Native Arizonan, and Executive Director of the Surprise History Project wrote “When the nation’s collapsed in 1929, demand for Arizona farm, ranch, and mining products evaporated. Drought in 1933 and 1934 made conditions for farmers and ranchers even more difficult.”

“Miners lost their jobs and farm, and ranch families lost their homes and livelihood. Businesses that depended on these industries went bankrupt. People left the state, and Arizona lost 50,000 residents.”

With the advent of World War II, “The Army established multiple facilities in western Arizona.” Sherry continued, “In all, one million members of the military trained in the state, many of them in preparation for airborne assignment.”

The photo of a World War II fighter plane.

A footprint of Luke Auxiliary field, now the site of the Surprise city hall. Originally it was a cotton field.

After World War II the population grew rapidly. Warm winters and the low cost of living attracted retirees from the so-called snowbelt, who moved permanently to Arizona.

However, they didn’t move to Surprise.

In 1954, two Real Estate developers bought 320 farmland acres near Phoenix and opened the first planned community dedicated exclusively to retirees. Typically, they were gated communities with controlled access and included pools, recreation centers, and golf courses. Potential buyers selected from 5 house plans, 15 exteriors, and prices that ranged from $8,500 to $13,400

By 1960, Surprise had only grown to 1500 people. It was still a small, rural community of farm workers living in an unincorporated area and relying on county services. Most residents focused on work, family, and friends, where everybody knew everyone else.

As its population grew, Surprise achieved 7,122 residents in 1980. City leaders took steps to improve infrastructure, extend the town’s boundaries, and provide additional services. They exceeded their goals. By the year 2000, the population was 30,848, a growth rate of 333 percent.

By 1997, builders completed a new home every three hours. The small rural, isolated town, where everyone knew everybody, erupted into a landscape of subdivisions, shopping malls, and thoroughfares. Surprise became the fastest-growing city in Maricopa County.

If city planners succeed, future Surprise could be a series of 21st-century villages. It could consist of neighborhood groups anchored by a central activity area that included “residential, commercial, employment, and civic uses” as well as “public facilities such as schools, libraries, and emergency services.”

This graphic displays the 2035 Surprise land boundary goals. Will 21st-century villages be achieved? I believe it will. My home is located in the extreme lower boundary of Village 1. All of Village 1 was fully developed in the 60s.

I exercise my two large dogs, Bernie and Chris, about 13 miles in Village 9. As of 2018, it was less than ten percent developed. Now, homes are being constructed in several subdivisions.

I consider Surprise, with its clean air, good roads, and excellent public facilities a first-rate place to live.

Edit them in the Widget section of the Customizer.